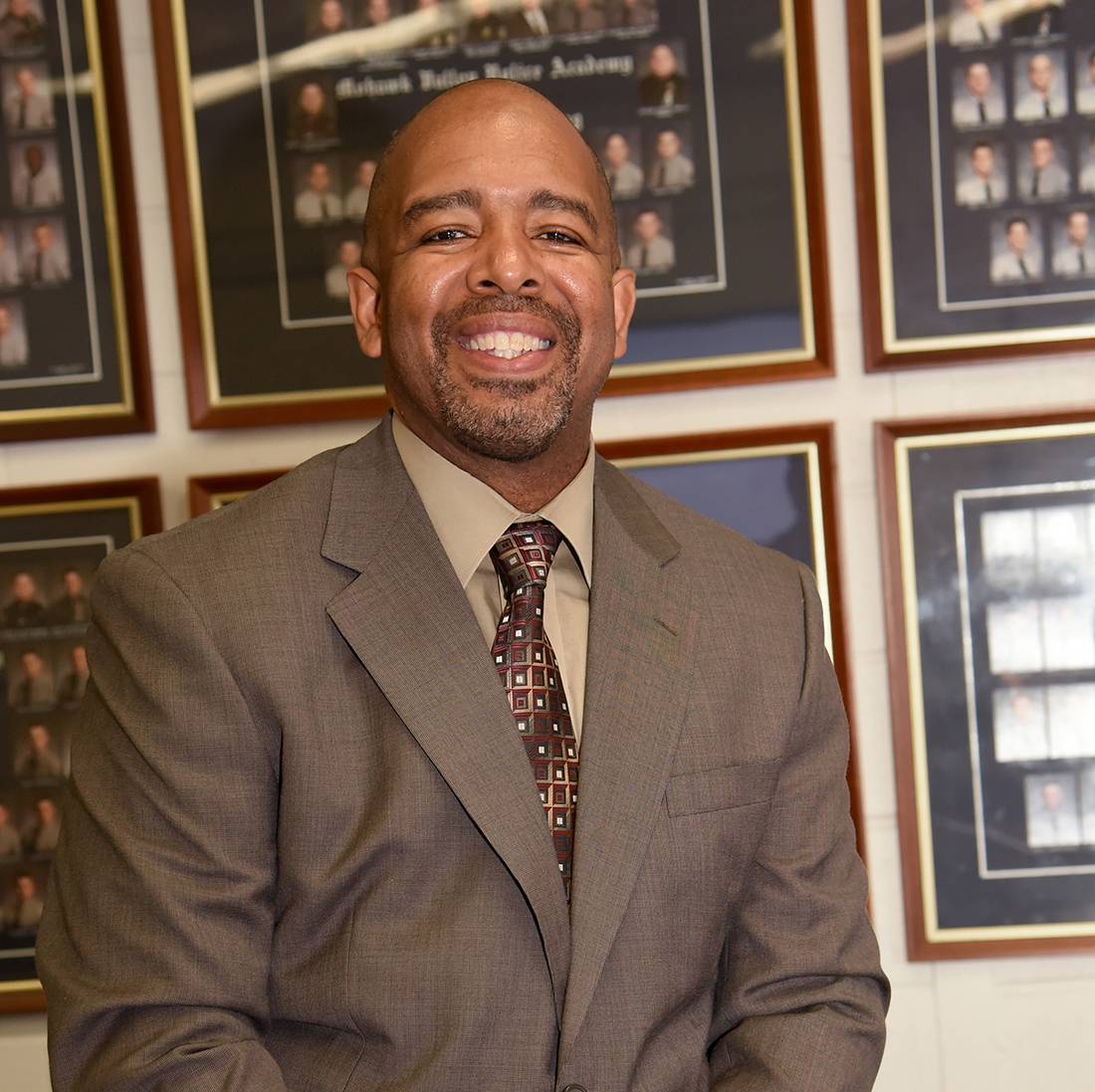 Since 2013, retired New York State Trooper Troy Little has capably guided MVCC’s Law Enforcement programs through nearly a decade of redesigns and occasionally tumultuous changes in the world of policing — but for Little, a Whitestown justice and father of four, this role is the culmination of a lifelong dedication to serving his community.

Little’s own educational journey was completed in stages. “A year, maybe two years out of high school, I ended up making my way over to MV after leaving a four-year school,” he says, noting that his initial experience with MVCC ended with a job rather than a degree. “I was there for quite some time at MV, changed degrees a few times like many of our students do,” he says, laughing, “and ended up leaving actually before I completed my degree to join the state police.”

Little later returned as an adult student to complete his degree at MVCC — and then forged ahead to complete his bachelor’s and master’s degrees before tackling his current work as a doctoral candidate, all while serving the community full-time in a job he loved. “It was a very rewarding career for me,” he says of his time as a state trooper. “It gives you the opportunity to deal with people, help people. You build great relationships.” 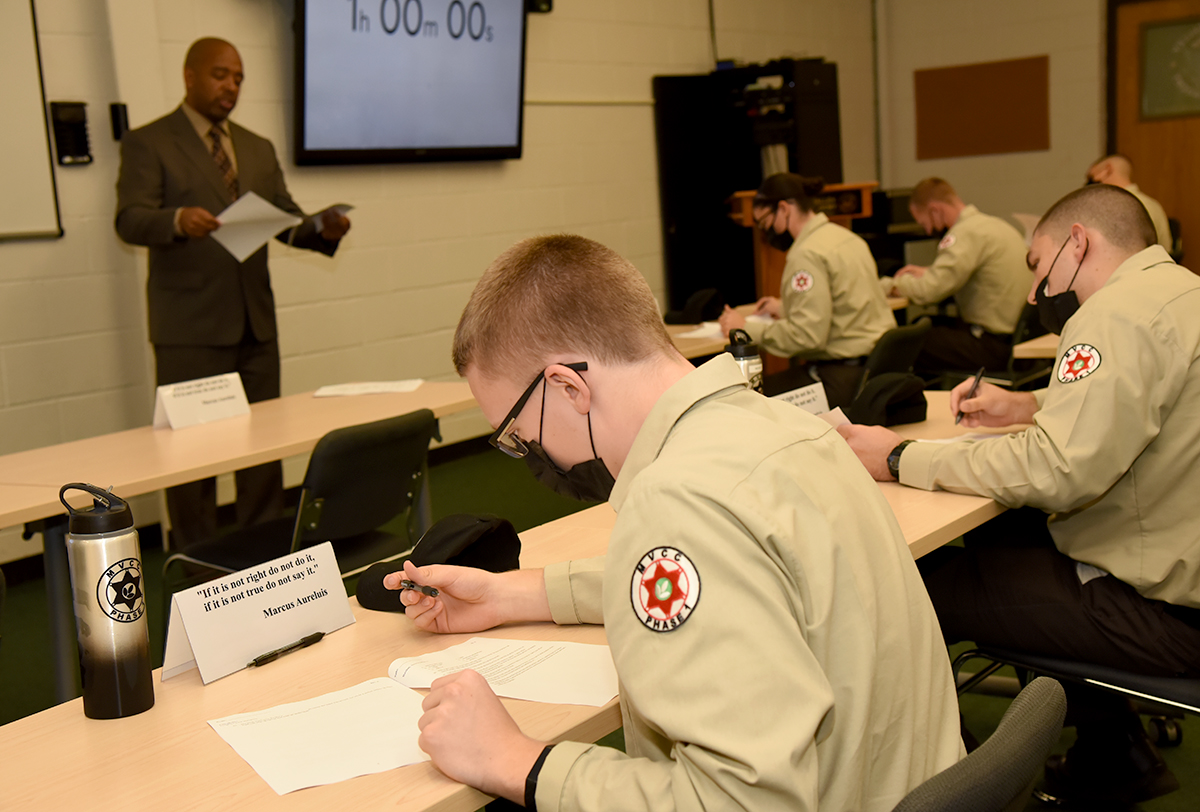 Seeing MVCC’s 2013 job opening for the law enforcement program was the catalyst that led to Little's retirement from the state police. “I really had no intentions on retiring — and then the opportunity came, my current job. It felt good,” he says, “the right thing.” As Little stepped into a new role overseeing MVCC’s intensive police trainings, he immediately began to draw on his experience to strengthen the program. Noticing that the fitness test posed a challenge, he focused on enhancing the training regimen, dramatically improving success rates. Little also was the driving force in developing regular assessments and adding training exercises to take the program beyond classroom theory and into everyday practical application.

In Little’s philosophy of teaching, everything comes down to the individual.

“The biggest thing I try to do with students that I take pride in is just teaching them to actually be learners,” he says. Little developed extracurricular supports — tutoring, library visits, and soft skills like time management and teamwork — to help students control their own success. “They become successful in the classroom, they’re successful in my class,” he says, “so to me it’s telling me that the things I’m showing them and instilling in them are working.”

Serving as a Whitestown Justice was a natural next step for Little. His motivation? “Wanting to help people where I can help people,” he says. “Especially within the last year, we’ve seen some — a lot — of highlights of shortcomings we have in our criminal justice system, so I’ve wanted to get involved in that and see what change I could bring.” First elected in 2019, this role gives Little another opportunity to support the justice system. “It’s a very small part, being a town justice,” he says, “but it impacts lives in the community. It gives me just that ability to help and try to bring some equity to the system that might not be all that equitable.”

As the national environment of policing has come under scrutiny in the past year, Little’s proactive work in MVCC’s law enforcement programs has put the College at the head of the class. “We were a little bit ahead of the curve with dealing with some of the issues when it comes to equity, racial justice, and diversity,” he says, “because that’s just part of what’s key to me.” As the events of the past year forced policing upheavals across the nation, Little says mass curricular changes were quickly mandated by the state. “Luckily it wasn’t new to us. I was moving forward that way anyway.”

'It’s a fresh start, and from here you can go anywhere.'

When asked about his most rewarding achievements, Little immediately circled back to his service with the state police. “I’ve got 22 years as a state trooper and I’m very proud of that career,” he says. “It’s a very meaningful part of my life. And now to come into academia, on the criminal justice side I have a lot of students — over half of them — that have aspirations to be police officers.”

“That is by far the most rewarding thing for me,” he says, “these young kids and they’re coming in right from high school or soon thereafter, and they’re looking at me with the glow in their eyes saying ‘I want to one day be a trooper.’ And I know the challenge to get there, but once they get there it’s just so rewarding.”

Little credits his attendance at MVCC as the springboard that gave him a chance. “When I came out of high school, I spun wheels,” he says, mentioning his initial enrollment. “I did very well the second time through, and I was able to carry that confidence and everything that I learned into my bachelor’s and then into my master’s and now into my Ph.D.”

Today, Little references his own story to motivate recruits.

“What I tell my students a lot of times is it’s a fresh start,” he says seriously. “Don’t worry about how you did at high school, or how you perceive yourself or have been perceived as a learner. It’s a fresh start, and from here you can go anywhere.”