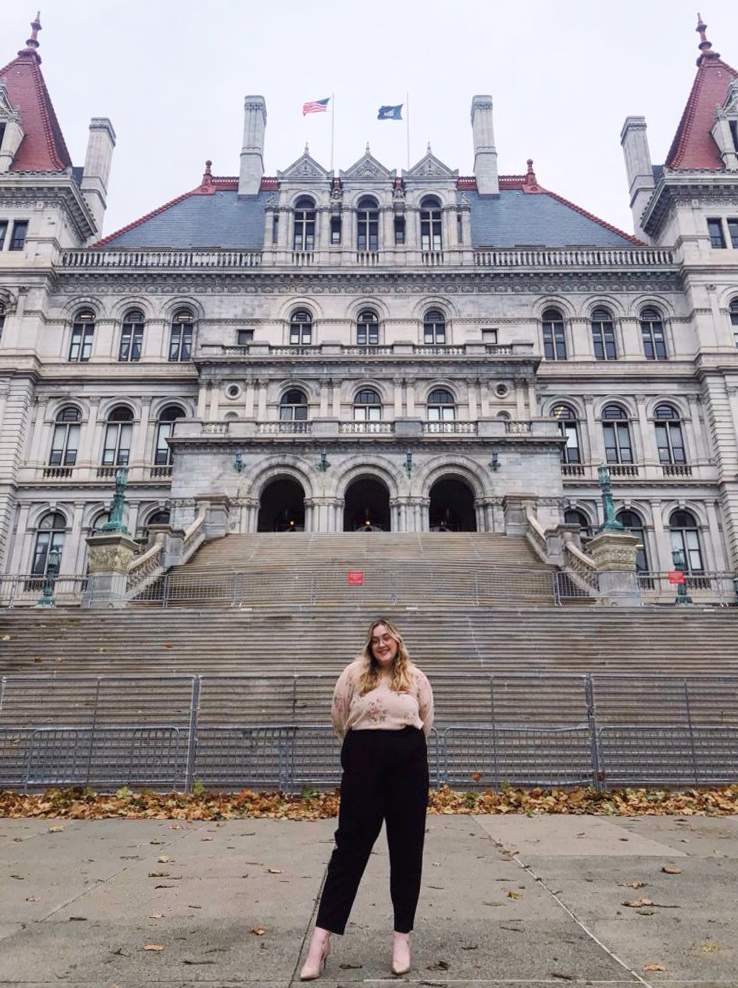 It’s been a whirlwind of a year for Taryn Rackmyer ’19. She spent most of 2021 finishing up her master’s degree while serving as the Diversity, Equity, and Inclusion Fellow at SUNY System Administration — a full-time position in which she worked on system-wide policies and initiatives and collaborated with chief diversity officers at all 64 campuses to help SUNY continue its mission of accessible higher education in New York State.

“I’m a first-generation college student who had no real expectations of what life would look like after college,” she says. “I certainly would never have imagined I’d have my dream job at 22 years old.”

As a Budget Analyst, Rackmyer advises senators on the fiscal implications of legislation on many topics, including immigration, liquor and cannabis law, consumer protection, and elections. She also is deeply involved in the development and negotiation of the $200 million state budget.

“The applied learning experiences I participated in at MVCC gave me the tools and connections to launch a successful early career that followed me to Albany,” she says. “My experiences at MVCC helped me branch out of my comfort zone and gain confidence in my leadership capabilities. And the supportive environment meant I never felt alone or uncertain about how to progress.”

Rackmyer earned two associate degrees from MVCC — Public Policy in December 2018 and Accounting in May 2019. She then transferred to the University at Albany Rockefeller College of Public Affairs & Policy, where she earned a bachelor’s degree in public policy (December 2020) and a master’s degree in political science, law, and politics (December 2021).

Compassion and a passion for learning is what steered Rackmyer toward the field of public policy. “Growing up, I was unaware of privilege. I hadn’t yet seen the ways in which injustice and inequality are ingrained in the social institutions we rely on, or how they prevent countless families from meeting their basic needs,” she says. “The resulting shift in my perception of American life drove me to dedicate my life and career to addressing the suffering I saw.”

Like many students, Rackmyer was looking for an affordable education. As a high school senior, she learned her achievements had earned a full-tuition Wilcox Exceptional Student Scholarship to MVCC. While making her college decision, she leaned on older sibling Amanda, a 2014 graduate of MVCC, who helped her become familiar with the opportunities offered by the College.

Once enrolled, Rackmyer found MVCC offered much more than affordability. “I was given the opportunity to work with a diverse body of students whose backgrounds and perspectives opened my eyes to the world outside my own.” She became deeply involved in campus life, joining clubs, and serving on the executive boards for both MVCC Student Congress and SUNY Student Assembly. She also worked in various offices throughout the College, including the Learning Commons, Center for Corporate and Community Education, and the Student Services Help Desk — her first real professional work experiences, which she says helped her refine her communication and time management skills.

“I think one of the things that stuck with me the most from MVCC was the importance and value of compassion,” she says. “Leadership isn’t just about efficiency — it’s also about the compassion and kindness you show, and that is something I feel I wouldn’t fully understand to this level without my time at MVCC.” 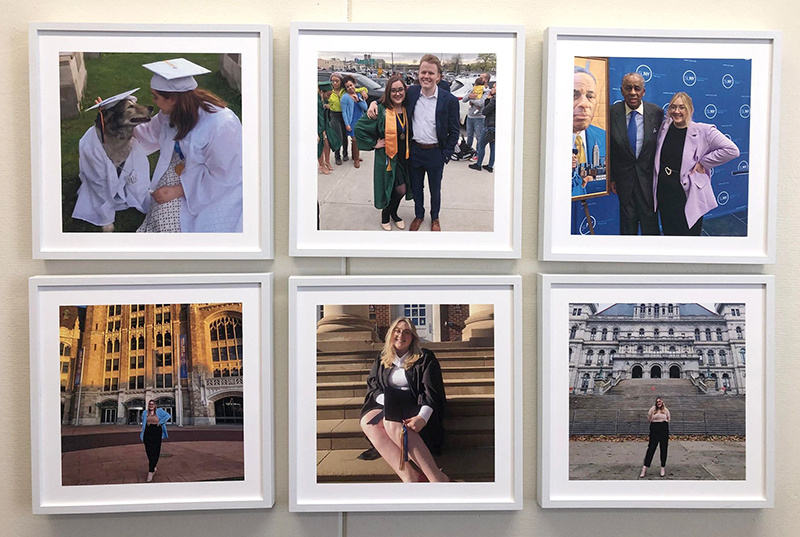 This collection of photos hanging in Taryn's office highlight some of the key moments in her journey: High school graduation, MVCC graduation, her move to Albany and working at SUNY, her last day at SUNY, UAlbany graduation for her master's degree, and her first day at the NYS Senate.