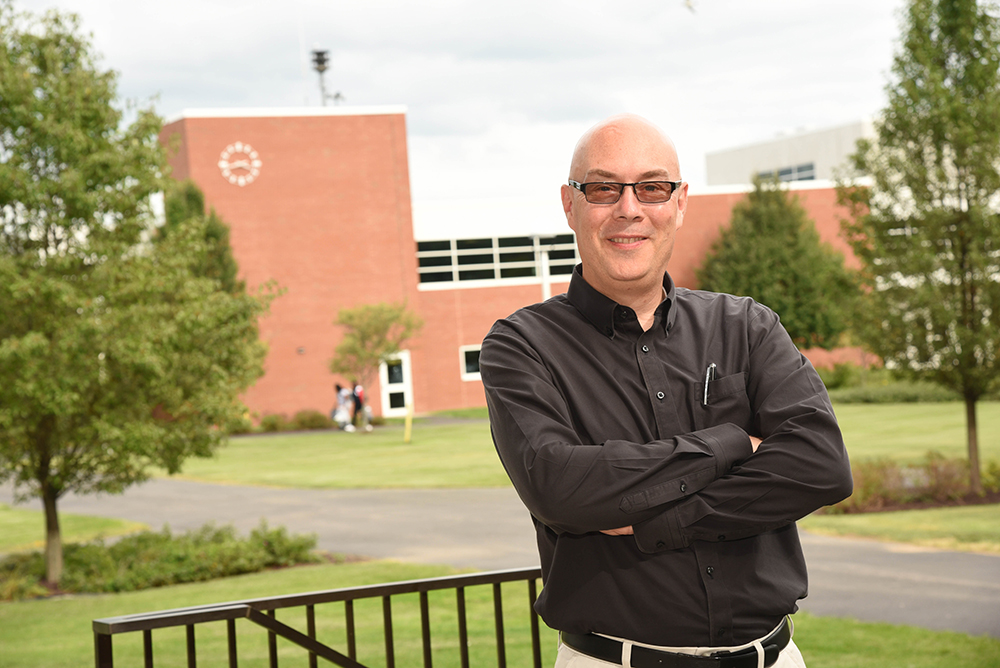 From humble beginnings, Rick Short ’81 has achieved great success. But talking about his accomplishments always brings him back to the same theme: building up others so they can achieve their full potential.

Short is corporate associate vice president and senior director of marketing communications at Indium Corporation, as well as a social activist who supports and promotes education, engagement, and modeling the way to improve the Mohawk Valley and the lives of those in it.

“This community is really, really different,” he says. “The energy is palpable. It’s the people that make the difference.”

His focus on community and developing future generations is evident in everything he does. He is an integral part of the local community, providing mentorship to high school and college students, as well as young adults. He is a mentor for the Utica University Young Scholars program, and serves on its advisory board, selection committee, and mentor advisory board. He also is a mentor and volunteer at the Midtown Utica Community Center, and serves and supports students and faculty in the Oneida-Herkimer-Madison BOCES P-TECH program.

“I love to cultivate new leaders and fire up our replacements,” Short says. “I work so hard at that through mentorship. I tell them, ‘Don’t worry about being good someday ... you already are. Just keep getting better.’”

Many of the students he mentors are from refugee families who don’t have the community connections others may have, so he works to provide them. Short says, “I emphasize networking and tell them, ‘it’s not what you know, and it’s not who you know; it’s who knows you.’ You’ve got to be known.”

For many of these students, being known is difficult. Some are economically challenged and don’t have a supportive home life. Some have been trained culturally to shrink back while everyone else steps forward, especially in an academic setting. “To them, a professor is like a god,” he says. “They are afraid to ask questions.”

To overcome that barrier, Short brings students to MVCC and connects them with staff in the President’s Office, Admissions, Financial Aid, Community Education, and other key areas. “They feel really special when the president knows their name,” he says.

Short’s weekly “Cookie Tuesdays” at the Midtown Utica Community Center help to build trust while vulnerable populations learn math, baking skills, and procedures — all under the guise of making cookies. “They think it’s just cookies, but it’s not that at all,” he says. “They bake cookies week after week, and one day they say, ‘I have to have a resume. What’s a resume?’ ... And the real work begins. Once they know me, only then can they trust me. And once they trust me, they can start opening up and asking some real questions.”

Once they get to know and trust him, Short will open up about his own life, and how it relates to theirs and his understanding of where they are coming from.

“Sometimes I feel they think I’m this magical thing that just rolled in from some special place,” he says. “But I tell them, ‘I understand you. I’ve lived some of your life. I don’t see a 14-year- old kid. I see a person who, one day, will be responsible for a whole pyramid of other people. I see that impact.’”

To prove his point, he will drive them through their own neighborhood and point out the spot where he rented an apartment while he was an MVCC student. “The apartment was so rotten that it just collapsed on us — while we were in it — in the middle of a cold December night,” he says. “I had to hand-dig people out of this house that fell in on us. That’s how poor I was.”

Short came to MVCC on a New York State Regents Scholarship. “It wasn’t a full ride, but it really mattered,” he says. “And it was quality. MVCC had reputation for academic excellence, and the teachers had a reputation for being tough and demanding.”

Short said he always appreciated those high standards, especially when he went on to earn his bachelor’s degree at Utica University and an MBA from Rensselaer Polytechnic Institute.

“If you come from a world with few rules, you need at least one anchor,” he says. “I was hanging by a thread. MVCC gave me that sense of professionalism, scientific principles, integrity, and high expectations.”

MVCC also was important in providing Short with connections of his own. It’s where he met his good friend and colleague, Greg Evans ’79, now president and CEO of Indium Corporation, and it’s where he reconnected with his future wife, Wendy, whom he had originally met in first grade.

Beyond his work with local students, Short also serves the College in other ways: he is the president of the MVCC Foundation Board and serves as a member of the MVCC scholarship selection committee. He served as a speaker at a recent commencement ceremony and was named the MVCC Alumnus of Merit for 2018.

“MVCC has always been with me,” he says. “Not just my classroom experience, but the reputation and its place in the community. It’s on the news, it’s in the stories people tell; and now it’s in the people I hire and work with. It still pumps me up. I feel like we’re flying in formation — I’m responsible for my jet, and, when I look out the window, MVCC is always right beside me.”