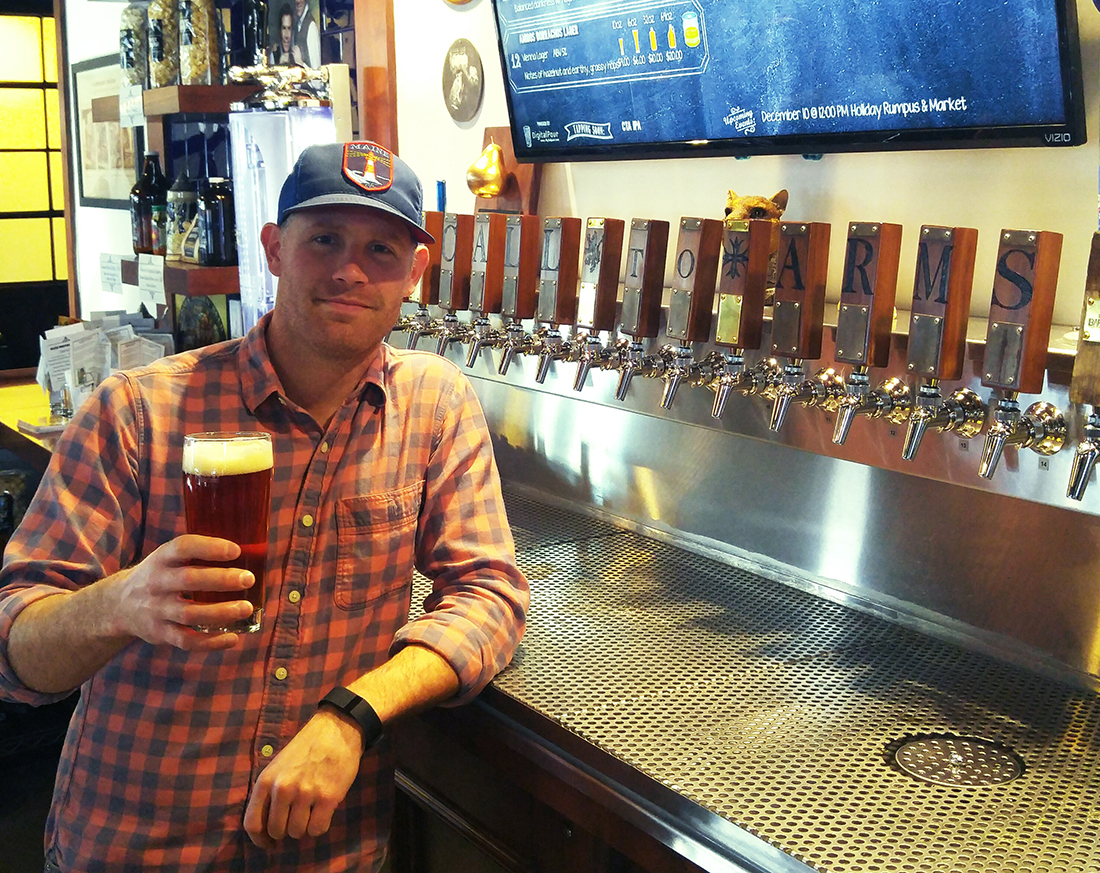 He grew up in Clinton, N.Y., just a short drive from Utica’s F.X. Matt Brewery, one of the oldest family-owned breweries in the country and the brewers of Utica Club, the first beer licensed for sale after Prohibition. Now he is one of three owners of Call to Arms Brewing Co. — a craft brewery he started with two partners in Colorado.

Brookstein describes Call to Arms as “a modern craft brewery steeped in Old-World tradition.” Located on Tennyson Street in the historic Berkeley neighborhood of Denver, the brewery has large bay doors that flood the taproom with Colorado sunshine, which plays well off the rich, dark wood stain of the bar and shine of the modern equipment.

“We really wanted to bring in the aesthetic of the rustic, European-inspired bars and taverns of the Northeast while still incorporating the great aspects of Colorado living,” Brookstein says.

Call to Arms has 15 taps to showcase its wide range of brews. Core beers include an Oatmeal Porter, Intercontinental Saison, Citra IPA, Vienna Lager, and Brookstein’s personal favorite, the Clintonian Pale Ale, which is named after his hometown. They also produce barrel-aged wild and sour beers, as well as other styles of beer “that have been lost in time,” like a Dutch Kuit and a German-inspired Zoiglbier.

Brookstein got his start in the industry right here in the Mohawk Valley — as a delivery driver at McCraith Beverages, a beer distributor in New York Mills. He started the job after earning his associate degree in Graphic Design from MVCC in 2001.

“My time at McCraith introduced me to a number of craft beers I hadn’t heard of, and it’s where I fell in love with Saranac and their portfolio of unique, delicious beers,” he says. The job also showed him that it was possible to make a decent living in the beer industry, and got him thinking about switching gears.

So what does a guy with an associate degree in graphic design considering a career in the craft beer industry do? Transfer that degree to a four-year school and expand his skills.

“MVCC was an excellent bridge between high school and SUNY Oswego,” Brookstein says. “I loved my time there — I loved the small campus lifestyle. I lived in the dorms, spent hours in the library and design studios, and played club soccer. MVCC is great because it allows young students the chance to earn their degree close to home as they transition into adulthood. And my MVCC credits transferred smoothly into the Communications program at Oswego.”

While at Oswego, Brookstein did a marketing internship at Brewery Ommegang in Cooperstown, which he says was “a life-changing experience.” The internship introduced him to the business and marketing side of the craft brewery industry.

After earning his bachelor’s degree from SUNY Oswego in 2006, Brookstein decided to head west to Colorado and give it a go in one of the nation’s most dynamic craft beer communities.

“I did everything I could to soak in the craft beer scene,” he says. “I applied to every craft beer gig I could find.”

His first job was a delivery driver at Twisted Pine Brewing Company in Boulder, which gave him the opportunity to become acquainted with the beers and liquor stores of his new state. Seven months later, he landed his “dream job” at Avery Brewing Company, also in Boulder.

“It was my time at Avery that really immersed me in the craft beer industry,” Brookstein says. “I started off cleaning kegs and scrubbing floors, which sounds rather mundane, but it’s a lot of fun once you gain an understanding of why these tasks are so important. My co-workers and bosses were actually teaching me the finer details of what it takes to produce world-class beer in a fast-paced environment — skills I was able to pass on to employees once I was promoted to packaging manager.”

Brookstein’s business partners, Chris Bell and Jon Cross, also worked at Avery, and the trio decided to take a shot at opening their own brewery. The industry had changed substantially in the six-and-a-half years Brookstein was at Avery; the business had grown from 12 employees to 175.

“My business partners and I saw this massive explosion in smaller craft breweries and realized our combined experience might give us the skill sets needed to open one of our own,” Brookstein says.

Bell, controller and sales director, used his degree in economics to guide the group down the right path in terms of investors and budgeting. Call to Arms head brewer
Cross has a degree in biology. As marketing and events coordinator, Brookstein works to bring exposure to the brewery through events, including the Rumpus, a bi-monthly party at the brewery; community-focused events; and Denver’s Great American Beer Festival.

“So all in all, we’re all using our degrees to some extent,” he says, “We’re just doing so by means of a factory making carbonated malt soda.”

Not bad for Year One. So what’s next?

Call to Arms understands that it can be hard to get a foothold in the world of can, bottle, and keg distribution.

“So instead of selling our beer in cases of cans or bottles, we’re focusing on keeping our beer on tap at local draft accounts with the goal of opening multiple Call to Arms locations throughout the state,” Brookstein says. “Colorado is friendly to breweries in that we can self-distribute our beers to all of our accounts rather than pay a distributor to carry the load for us.”

The partners just finished an expansion of their current taproom, and already have started discussing the logistics of a second location.

Brookstein says he tries to make it back to the Mohawk Valley every chance he gets, usually every other year. This past July, he and his girlfriend were in Utica to participate in the 2016 Boilermaker.

“I usually drive directly from the Syracuse airport to Cafe Del Buono, and from there I pick up some Saranacs or Utica Clubs and drive to meet friends,” he says. “F.X. Matt really brings so much life to Utica, as do the new beer-focused establishments like the Green Onion and Nail Creek. It’s great to see.”

Does that mean Call to Arms could someday open a location in Utica?

“As a proud Central New Yorker, I would absolutely love to open a brewery back home — particularly in Utica,” Brookstein says. “But for now I am tied to Denver.” 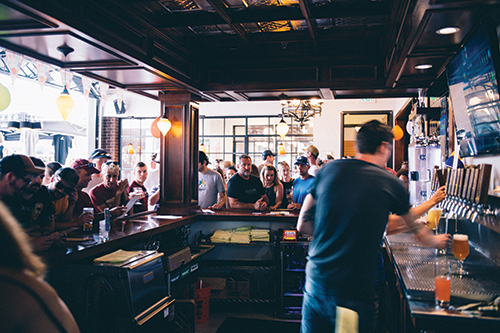 Behind the bar at Call to Arms Brewing Co. in Denver, Colo.