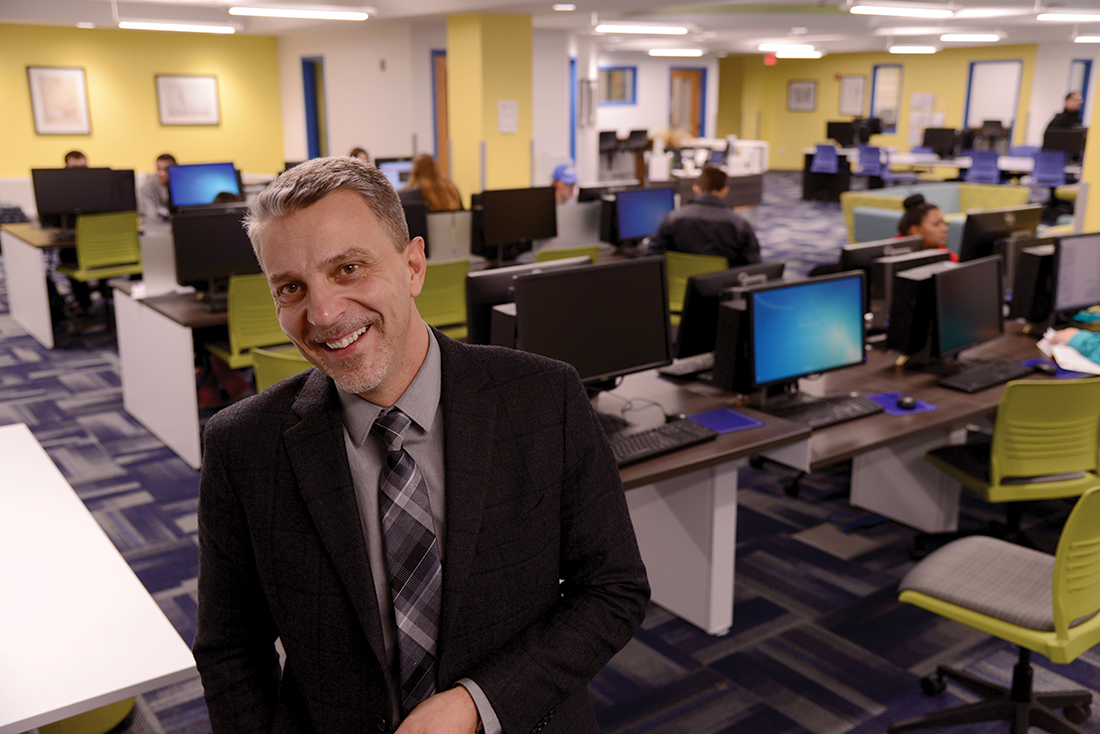 Ibrahim Rosic, director of the Mandia Family Learning Commons at MVCC, understands the importance of a supportive, welcoming environment to help students succeed.

In 1999, he left his native country of Bosnia, where he was an electrical engineer with a master’s degree from the University of Zagreb in Croatia, and arrived in Utica, N.Y., facing a language barrier that kept him from finding a job.

“I didn’t know the language,” he says. “A friend of mine talked to me about going to MVCC to learn English. I kept saying I am too old to go to college, but one night he brought me here and we walked the hallways, and I realized that there were many adult students.”

Rosic enrolled in MVCC’s English as a Second Language program. During this time, he sought help with his studies in the Learning Center, and one of the peer tutors there helped him on the path to completing his associate degree.

“Her encouragement and help made me realize that I could overcome anything and be successful,” he says. “It was then that I realized I wanted to give back to other students as she did for me.”

Rosic’s strong math background made him a great help to other students, so he was hired as a peer tutor, and then started working full-time while he completed his bachelor’s and master’s degrees in electrical engineering at SUNYIT.

“My background is in engineering, but helping people is what I want to do,” he says. “Students really appreciate tutors and the help they give them. Sometimes just being there is all they need.”

In January 2013, Rosic was named director of the MVCC Learning Center. Almost immediately, the center transformed into a bustling, welcoming, fun environment that students sought out to help them succeed.

In 2015, MVCC was awarded one of 41 Title III grants from The U.S. Department of Education’s Strengthening Institutions Program. With this grant, MVCC was able to transform the Learning Center into the Learning Commons — a renovated space dedicated exclusively to promoting student success. The Learning Commons, located on the first floor of the Information Technology Building in Room 129, officially opened for the Fall 2016 semester. (On the Rome Campus, the Learning Commons can be found in Room 102B of the Plumley Complex.)

“Location and accessibility are very important,” Rosic says. “We wanted this to be an inviting and comfortable space — a safe space for students to say ‘I don’t know.’ Often, they may be afraid to say they don’t understand something while they are in the classroom. Here, they know we won’t judge them.”

Equipped with math, writing, and computer labs, as well as peer and professional tutors, the Learning Commons is a one-stop shop for any questions or problems students encounter while trying to achieve academic prosperity. Students can schedule appointments with tutors on the Learning Commons section of the MVCC website for a variety of academic areas, including Mathematics, Science, English, Computer Operation and Programming, Social Sciences, and Humanities, as well as ESL.

As one of the first community colleges in New York State to be a member of the Achieving the Dream coalition, MVCC recently hired three Completion Coaches to help students stay on track of their studies, using Starfish Software to flag potential barriers to completion.

In addition to academic assistance, the Commons is there for students dealing with personal struggles, including finding child care, getting a bus pass, and financial situations.

“We offer wraparound services to remove any barriers that could potentially stop them from graduating,” Rosic says.

Rosic says the space also serves as a gathering place. “They use it for socializing, as well, which is great. It’s so good for students to get connected to each other and the campus — they come here, have lunch together, work together, study together, help each other through issues, then they are motivated to come back, and to stay in college.”

While the new space is beautiful and state-of-the-art, Rosic says that it’s the people who make the Learning Commons such a great place to be.

“I have a really nice team,” he says. “We are like a little family here, and everyone is phenomenal. Everyone cares so much about the students and each other, and that is important for students to see.”