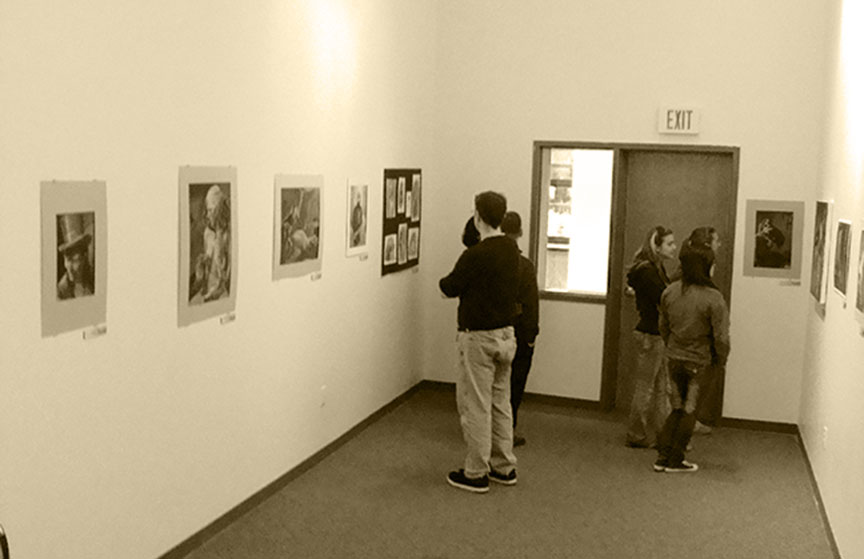 The Juergensen Gallery is named for Virginia and Edward Juergensen, artists and MVCC professors who are remembered for the lasting contributions they each made to Mohawk Valley Community College.

Both were accomplished artists, and kind and caring teachers. Edward began teaching at MVCC in the 1970s, while Virginia arrived in 1967. Together, they helped the College's former Advertising Design & Production Department evolve from its initial advertising design to a broader scope in graphic design.

Virginia formed a nationally recognized curriculum in graphic design, and her influence continues today in the teaching careers of her students, who are now art faculty at various colleges and universities throughout the United States. She had begun her career in art and graphic design in the 1950s, working as a graphic designer in the local electronics industry. By the early 1960s, she decided to continue an educational career that began in Buffalo at the Albright-Knox School. Graduating from Syracuse University in 1965, she was a pioneer – one of the first women in America to graduate with a master’s degree in design and, two years later, perhaps the first woman in America to teach graphic design at the collegiate level. She taught at MVCC through the 1990s, retiring in 1993. In her own art, an interest in the fundamental principles of design is always evident. Whether the art form is graphic design, painting or fiber arts, her passion for organic shape is a constant.

During WWII, Edward served in North Africa, the Italian campaign, and in Germany. After completing his service as an officer in the U.S. Army, he returned to Central New York and attended Syracuse University. Painting and drawing were passions before he went to war, and he honed his skills at Syracuse. After completing his degree, Edward worked in industry and was a successful freelance cartoonist. His cartoons were published in newspapers and magazines throughout the United States. Later on, Edward started a local art supplies store and, by the 1970s, was teaching at MVCC as a drawing and cartooning instructor. In his paintings, Edward focused on Adirondack scenes, and his landscapes are of a different style than the cartoons: in his later paintings, he experiments with color and light, providing impressions of the landscape, the sky, and the forest. His cartoons, again often based on an Adirondack theme, are a far more realistic survey of a funny man’s life in the North Woods.

Edward passed away in 1994, and Virginia died in August 2003. She lived her last years in the Adirondacks, and had successfully launched, in North Creek, the series of summer seminars she named the Hudson River School of Art. The degree to which she and Edward loved MVCC was demonstrated, a final time, in her generous bequest to MVCC. The financial portion of that bequest will insure that generations of future students will receive the Edward Juergensen Memorial Scholarship, but there was more – Virginia gave her entire collection of art, the life work of two artists, to MVCC. The Juergensen Collection, more than 500 pieces of art created by Edward and Virginia, includes more than 200 original Edward Juergensen cartoons and Virginia’s paintings and fiber arts.