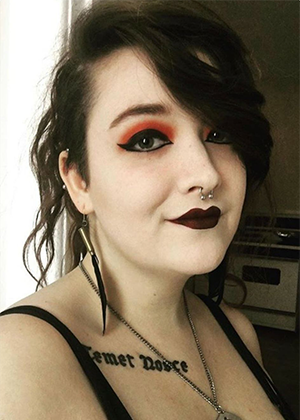 As someone who is transgender, it can feel like you never stop coming out, especially when you don’t conform to gender norms. I am an androgynous, transgender man, and the only person I have come out to in my family is my mother. When I was in my final year at high school, I was able to go to therapy for mental health related issues. There was one day when my mother dropped me off, but requested to talk to my therapist before I went in, which I thought was odd. Later when I went in to speak with my therapist, she told me that my mother was suspicious about my recent behavior. I was uncomfortable when she called me “girly,” which was a nickname I had always had in my family and I had checked the “male” box when I filled out my form for my graduation cap and gown. Among other things, she explained this to my therapist who asked me how I wanted to proceed, and knowing that my mother has always been supportive if the LGBT+ community, I decided to tell her that day during my session. My therapist brought her in and I asked her if she would’ve been disappointed if she didn’t have a daughter and only had boys. She said the gender of her children didn’t make a difference to her, as long as they were good people and were happy. I explained to her that I was her son and not her daughter. My mother tried to process it as best as she could but ended up saying “I don’t see it.” She explained that because I enjoy wearing makeup and want to keep my long hair, she didn’t see me as a man. She didn’t understand why or how I knew myself to be a man. I explained to her that outward expression doesn’t always align with gender and that some days I wanted to present differently, but I didn’t have the resources and it wouldn’t be safe, given that I still lived with a transphobic father. However, she didn’t really understand what I meant.  She said she loved me and accepted that I felt the way I did, but couldn’t see me as her son.

Two years later, in my first year at college, she visited me in my dorm and I sat her down and told her again that I was a man. She still didn’t “see it.” I eventually showed her a video of Stef Sanjati, a trans YouTuber, and in her video, she and her parents answered questions regarding Stef being transgender, many of which were questions my mother had. My mother took some time to think about it and asked me if I was sure that I wasn’t a lesbian (and I explained to her that I’m attracted to men, making me a gay man, which took her some more time to process), and she asked me why I thought I was a man if I still enjoyed presenting in a feminine way sometimes. I explained that I’m androgynous, I like looking masculine and feminine, but presenting feminine right now is safer, and I listed off a few of my guy friends who weren’t trans but wore makeup, and then she understood. She told me that calling me by different pronouns when my father wasn’t around and switching back when he was home was going to be hard (if he knew, we don’t know what he would do). I told her I could wait until after I moved out for him to know. Afterwards, it would still take her time to get it right, but now she understands that I am her youngest son, and we have a strong relationship.