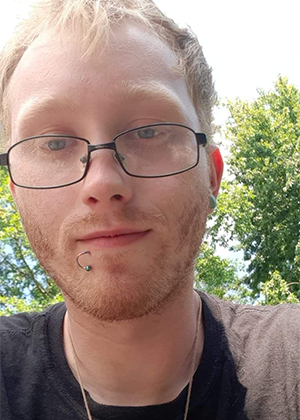 My name is Nathan, but I go by Nate. I'm from a small, conservative town called Morrisville. When I say that Morrisville is conservative, I really mean Conservative. Being gay is "hard to get away with." I was in sixth grade when I realized that I was sort of different. I had these weird feelings toward guys and they made me feel really awkward. I denied them as much as I possibly could. I denied them to the point of being homophobic. I was so homophobic that I hated myself and my friend that tried coming out of the closet in sixth grade. The years went by, more of my friends came out as Trans, Gay, or other LGBTQAI identities, and I slowly became accepting of them. Eventually I looked into a mirror and told myself: "I'm gay and that's okay." That was when I was in grade 11. I kept it bottled up and it caused me a lot of emotional pain, so I started telling the people around me and got positive feedback from about 75% of them. I lost a few 'friends' though. Then the summer before senior year came ... Nobody in my house knew (even though my sister had suspicions), and I figured it was time to come out to my parents.

Now, my father likes using homophobic slurs, and up to recently thought AIDS caused homosexuality. I sat them down, and my stepmom seemed okay with it and had many questions. My dad, on the other hand was in denial, and told me that he was very disappointed in my "decision." He said that I was going to die from AIDS if I didn't change my ways, and that as his oldest son, the only son who can carry on the family name, I was his biggest failure and disappointment. Of course that hurt. He refused to talk to me for three weeks. And when he started talking to me, it was because he had to. Now, the story does NOT end there. Eventually, my dad did come around and he actually told me that he regretted telling me those things that he told me when I came out. He told me that his biggest regret with me was that he failed to love me regardless, just like he always promised me as a child. Graduation came, and he went to it. He was cheering for me the louder than anyone else at the ceremony. He actually teared up. He told me he was proud of me, and nothing, not even something as small as my sexuality could change how he felt. I feel like my story is proof that it gets better. There will be rough times, but it will get better. You may lose friends, but it will get better.